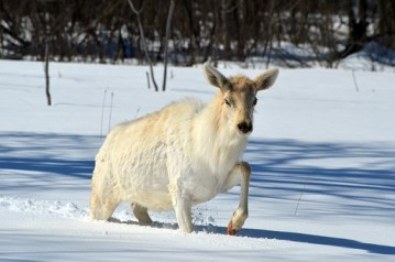 The Nearctic region covers the whole of North America and extends to the south as far as the middle of Mexico. It also includes the whole of Greenland.

The Nearctic region presents a great variety of physical features. Greenland is entirely arctic and is buried completely beneath a mass of ice of unknown thickness. The eastern part of North America is composed of mixed or deciduous forest. The middle part is composed of grasslands.

In the northern region, there is a great variety of stretch of coniferous forests. In the northern portion, the winter temperature is much lower than is found at a corresponding latitude of Europe. Life is very scarce in this region as few animals can survive in frozen soil.

This region possesses 120 families of terrestrial vertebrates, of which 26 are mammals, 59 birds, 21 reptiles and 14 amphibian families. Of these 5 families are endemic and peculiar to the Nearctic region. Swellel, Prong-horn buck, Wren tits, Californian lizard, mud eel, a tailed amphibian.

Among birds, peculiar ones are grouse and turkies. Besides, these, the important birds of this region are wood-warblers, red cardinals, hummingbirds, hawks, pelicans, herons, cranes, vultures, sandpipers, kingfishers, etc.

Among reptiles, crocodiles, alligators, snapping and musk turtles, geckos, anaguids, skinks, Heloderma (the Gila monster, the only deadly poisonous lizard in the world), greater snakes, rattlesnakes, coral snakes etc. may be regarding as important.

Amphibian fauna is comparatively rich. Tailed amphibia are abundant. These include salamanders, axolotls, sirens, etc. Frogs and toads are also numerous and very common. In the mountain streams of the North, West USA lives a peculiar frog Ascaphus. Like other frogs, it has no tails, but it has tail-wagging muscles, suggesting descent from some tailed ancestor.

The fauna of the Nearctic is characterized not only by the animals it contains but also by the absence from it of otherwise widespread families in the neighbouring regions. For example, there are no hedgehogs, hyenas or pigs from Palaearctic, no tapris from the Neotropical and rather more surprisingly no camels which are represented in both neighbouring regions.

Of the 24 families of Nearctic land mammals, none has discontinuous distribution. In other words, the Nearctic does not share a family exclusively with either of the Old World tropical regions or with Australia. Birds are less differentiated from the neighbouring regions. Compared with the Palaearctic and Nearctic is richer in reptiles.

But with these exceptions, the fauna of the Nearctic as a whole very similar to that of Palaearctic. It resembles Palaearctic in possession of wild cats, bears, wild oxen, deers, rabbits, moles, squirrels, wren-tits and many others.

So much close resemblance that Heilprin in 1887 suggested the union of these two regions into one great region called it Holarctic. This scheme received approval from Newton, Huxley and Lydekkar. The Nearctic and Palaearctic share among them no less than 9 families or terrestrial vertebrates which are exclusive to this so-called ‘Holarctic region’.

In short, it may be said that the fauna of the Nearctic is complex of New World tropical and Old World temperate families.