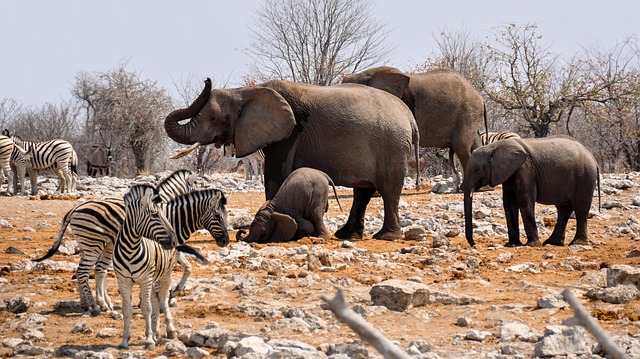 It consists of whole Africa (except for its northern part, which is included in Palaearctic), and the southern part of Arabia. The large island of Madagascar with its small neighbor such as Mauritius, Comoro islands) is often included by some authors in this region, but geographically, geologically, and zoologically, this island is very distinctive and hence, has been treated separately as an Ancient Island.

This region is bounded on all sides by sea except on the northern side which is continuous with the Sahara desert which is the largest desert in the world. Sahara desert forms a barrier between the Palaearctic and Ethiopian regions.

Since nearly the whole of Africa lies between the tropics, the conditions of life are much more uniform. It has big rivers, high-up mountains, vast grassy lands, and thick tropical forests. In January, the whole Ethiopian region has a temperature of 20 to 30°C with the still high temperatures in Central Africa. The distribution of plants and animals is more influenced by moisture than temperature.

The fauna of the Ethiopian region is very rich, varied, and well marked. It consists of as many as 161 families of terrestrial vertebrates. The Africa scene is pictured with herds of large mammals like, gorillas, chimpanzees, monkeys, giraffes, zebras, antelopes, lions, leopards, rhinoceroses, hippopotamus, elephants, hyenas, wolves, etc.

Only the shrews, cercetid mice, rabbits, mustelids, cats, dings, squirrels, and bovids have a wide distribution. The rest of the mammals are shared with the Palaearctic and Oriental regions.

Six families of birds are endemic to this region and these include ostriches, secretary birds, hammer-head, crested touracos, mousebirds, and helmet shrikes.

Reptilian fauna is very rich and includes reptiles such as turtles, agamids, crocodiles, monitor lizards, pythons, vipers, boas, etc. Of the total 50 species of chameleons in the world, 46 species are found in this region. Girdle lizards are peculiar to this region.

They are less distinctive. Frogs and toads are numerous but tailed amphibians and tree frogs are absent in this region. The only notable family which is exclusive to this region is Dactyethridae represented by genus Xenopus(the clawed toad: these have nails on their feet)

Ethiopian fish fauna is diverse and includes many primitive groups such as polypterus, protopterus, mormyrids, and others.

In the unique families of vertebrates, it ranks second only to the Neotropical region. The Ethiopian region shares with Palaearctic families of jerboas, coneys, dormice, and wild horses but it also differs markedly from this region in being without moles, beavers, and bears.

With oriental region, the Ethiopian region share eight 8 of its mammalian families such as lorises, Old World monkeys, apes, bamboo rats, elephants, rhinoceroses, chevrotains, and pangolins are all confined to these two regions. Of the four great apes of the world. The gorilla and chimpanzee, live in the forests of Africa. While other two Orangutans and baboons are found in the Oriental region.

Thus, the Ethiopian has certain similarities with both Neotropical and Oriental regions because all these have a tropical climate but their similarities are much stronger with the tropics of the Old World compare to that of the New World.