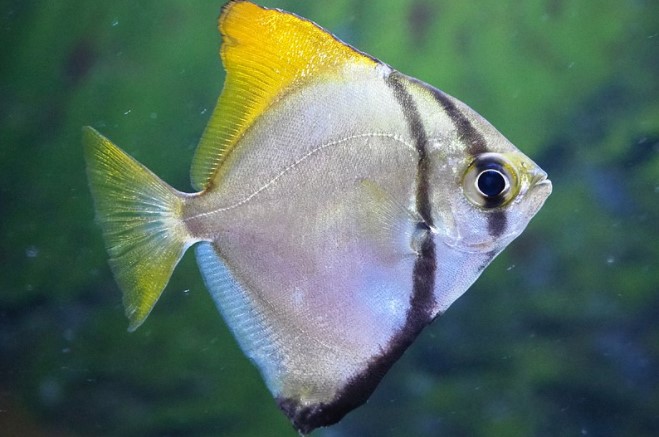 Monodactylus: Greek, monos = one + Greek, daktylos = finger. These are also known as moonyfishes or fingerfishes. It is least concern by the IUCN.

At maturity, their length is 13 cm. Maximum length reaches up to 27 cm. And common length in most fishes is 12 cm. Total dorsal spines: 7 – 8, Total dorsal soft rays are 27 to 31. The Colour of an adult is bright silver which ranges from yellow and dusky dorsal fin tip. A more colorful pattern is shown by small juveniles.

The species of monodactylus argenteus freshwater river, brackish and marine water. It is found in estuaries and embankments in Australia near piers.

These fishes feed on detritus and planktons. They also eat shrimps, small fish, and vegetable matter in large quantities. They are commonly seen in the school of fishes except juveniles either live solitary or are found in small groups.