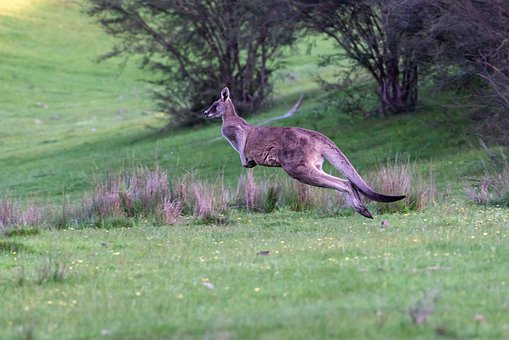 The Australian region covers Australia, Tasmania, New Guinea, and several smaller Islands of the Indonesian archipelago New Zealand and Pacific Island are not included in this region and many workers prefer to treat them separately as oceanic islands respectively.

The Australian region is partly tropical and partly temperate. The region is unique in having no land connection with any other region. New Guinea and the northern part of Australia are tropical, with high summer temperatures, and covered with luxuriant tropical rain forest.

Southern Australia is of a temperate climate with forests of eucalyptus and mixed hardwoods. The interior of the Australian continent consists of hot, and plains, and desert.

The vertebrae fauna of Australia is very poor. It lacks both varieties as well as the number of families. It is characterized by the absence of higher placental mammals and the presence of a variety of primitive forms. Primitive forms include mammals, such as monotremes (egg-laying mammals), marsupial mammals (pouched mammals).

Birds such as cassowaries, emus, tooth-billed pigeons, birds of paradise. Reptiles such as scale-footed lizard. Fish like Neoceratodus (lung-fish), freshwater mussels Trigonia and mountain shrimps (Anaspids). Hence Australian region is often referred to as the ‘veritable museum of archaic animals’.

Its prolonged physical isolation provided refuge for its primitive forms and prevented the higher and more aggressive placental mammals from reaching this lone continent.

Although there are rabbits, rats, foxes, and mice that have been introduced recently by man in Australia, the dominant mammalian fauna consists of marsupials. The most conspicuous and widespread marsupials are kangaroos, wallabies, bandicoots phalangers, wombats, etc.

Marsupials exhibit an excellent example of parallel radiation occupying all types of ecological niches as occupied by placental mammals in other parts of the world. Thus, there are all kinds of marsupials i.e., herbivores, carnivores, insectivores, arboreal. fossorial, and so on.

The two unique families of monotremes

both are egg-laying mammals

The bird fauna of the Australian region is also very peculiar and rich parrots and pigeons exhibit great diversity. So diverse are the Australian parrots that they a recognized as three exclusive sub-families (namely, cockatoos lories and pygmy parrot).

Trogons, cuckoos, kingfishers, honey-eaters have a wide range. Ten families are unique and include, flightless birds, birds of paradise, honey suckers, lyrebirds, bower birds, tooth-billed pigeons, megapods, etc. There no pheasants, no woodpeckers, no barbets, and no finches which are abundant in other regions.

Australian reptiles are only moderately varied and only two families are exclusive to this region, namely Carettochelydidae (fly-river turtles), and Pygopodidiae (scale-footed lizards). Although there are 250 species of lizards, all are small ones. Among large lizards, the Komodo dragon’ a species of Varanus is notable. Crocodiles occur in tropical parts of this region.

Amphibians are few, Australia being the only region in which common toads are missing. Common frogs and tree frogs are represented by 100 species. A tailed amphibian is absent.

The freshwater fish fauna is very poor. Of the three living genera of lungfishes, one of the Neoceratods is found in the rivers of Queensland.

On the whole, the Australian region is characterized by the presence of many primitive forms. The Australian fauna is remarkable for the poverty of its freshwater fish, amphibians, and reptiles and the uniqueness of its mammals.

Some parts of the fauna, a few frogs, turtles, and marsupials resemble the Neotropical region. But another part made up of terrestrial reptiles, many birds show a close affinity with the Oriental region. The Australian region has little in common with the Ethiopian region.