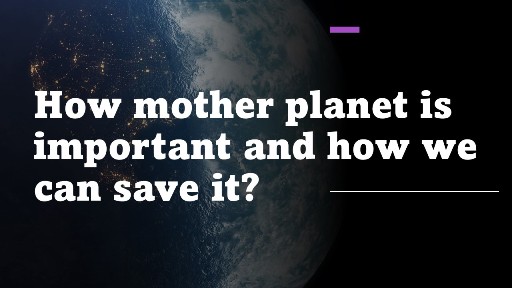 Why earth is more important

Earth is your most beautiful and vibrant planet, and life is in it with all its splendor, from the simple animals cell to the humans, as well as from the simple plant cells to beneficial vascular plants.

There is life, there is so much water, there is more than enough for life on it, there is a balance that is going on and everything is going on happily within its set balance.

But over the last few decades, it has been said that over the past few decades, the most important of the living things on earth, humans, have tried to create more important things for themselves. We have taken some steps to make things easier for ourselves, which has increased the fear of losing balance and beauty in this world, and in a few years, this difference has become clear.

The growing population and the scarcity of space on Earth is a huge problem that many countries are trying to solve by finding more such planets. Take those who have the same atmosphere as the earth above and go there and settle down because people think that the way they are treating earth, it will last soon.

The balance will deteriorate. It will destroy everything. So it is time to take steps to get man to another planet. The biggest discovery that has come to light so far is that Mars is there. Life to be settled.

But I don’t think it will ever be possible easily. It can be for small scale to go for research and try. It is a good thing and it should be, and human instinct is to have it on a planet that is very close to you. It’s impossible to make a living on it, to create such a large-scale environment for life.

You can do this in very large jars and containers, but if you do it on a large scale in open, it is very impossible, because when we talk about the atmosphere, it is very complex and millions of years old. After the sequence came the balanced form that was found to be the best for life. But such a balanced state does not yet exist on any known planet.

There is a lot of speculation but we cannot say for sure. Similarly, we do not have the technology to easily move from one planet to another. Efforts are being made, but I don’t think it is possible in a few hundred years to change the entire atmosphere of a whole large planet mars.
A very sweet and good rule is that first you fix your house then you fix your street then fix the neighborhood and then fix it in the same way overall.

It would be very easy for us if we put the same formula in front of us and apply this formula to the universe. Is it weird that we are moving forward-thinking that one day our home, the earth, will not be able to support us, then we will have ease in another world, then what do we think, another world will be enough, and full of resources, then we will be spoiled and will also read out in search of a third world and this series will continue?

Believe it or not but it is a fact that the owner of our land has its own rules and regulations. Its creation is based on balance. If you disturb its balance, it will disturb your balance. You treat him well, he will treat you very well.

Unfortunately, none of our attitudes towards this land are good. We are constantly taking advantage of it, not even providing the minimum necessities for its livelihood, that is, it means this land for our livelihood as well. Not giving enough space to earth to support us well. And we’re giving it a different name, such as global warming, deforestation, industry, urban life, population growth, and much more.

Factor important to save the earth.

All that has been mentioned above is the significant increase in population that is the basis on which we are exploring other places. One day there will be so many people on earth that it will be difficult to live here. Will be forced to move to another place and shift there. It will take so much money that we can’t even think about it.

It will take so much thinking, intellect and energy that we can’t even think about it because you are going to build a whole planet. So can’t we focus on making our energy expenditure less than what was mentioned above and making life easier? I mean, why don’t we put our energy on this earth, that is, what we have before? Has been supporting since.

Behave very well and do not let its balance deteriorate. And I think it will be much easier to fix it where it has happened.

Every country wants to have nuclear energy use it to meet the needs of their country. But what a joke that we all know that whoever has this skill has used it in such a way that in the future. They will destroy this land and its name will be, that we are use this energy to kill our enemies but in reality, you are no Killing and destroying your enemies but yourself own.

Because your will be using this energy to kill your own species. And ultimately you will be at the stage to destroy your mother the earth, that has support and evolve you.

If every country has this energy then it will be put to good use automatically because every country will know that it has the same technology. In the same way, if it is removed from all keeping countries, the atmosphere of fear will disappear.

The balance is that if you have cut down ten trees, you should plant at least ten trees so that your need is met and the balance is maintained. But if only cutting down trees is a very wrong thing, which is being worked on with full force and trees are being cut down.

So if we are making our earth barren like Mars, is it foolish to think that we can make a barren earth like the Mars, that is, make Mars like the earth? It is better and better that we let the earth remain the earth and maintain its balance at low cost.

We are crying a lot about global warming and we are really moving in that direction that may not be possible to return at normal state. As far as human need is concerned, in simple and simple life they are fulfilled in a much better way but if you talk about luxury then a lot of industry must be invested.

Obviously fossil fuels are needed to run the industry and if fossil fuels If it burns, heat will be generated which will be more than that. A lot of work is being done on it, but not as much as the fossil fuel is releasing carbon dioxide into the atmosphere. Try to live simple life quite near to nature.

Man has made every effort to find a way of ease from nature but he select a complex life, which is called urban and fast life, which is having a very bad effect on the environment. For example, I will give something like this: The human population will be very large in a place.

There will also be urban heat pockets. The air will get hot and rise and cold air will come very fast to fill this gap. This is what we call a storm. The thing we see is that storms come more often in urban areas. And do a lot of damage.

The solution to land problems

It is very easy and common sense to let the earth live like the earth. Earth has its own rules and regulations. It should not be tampered with. Take it out of your mind that you will spoil it and you will be fine. It will not happen at all.

The earth itself has taken very drastic measures and will rebalance itself, but in this period the self-made man, The balance will deteriorate. The wise thing to do is to give our land more protocol than the earth has given us. First of all, understand nature laws.

Understand what is called natural laws and comply with it as much as the place. Take steps that will make you feel better about yourself. Similarly take necessary steps that support nature. It doesn’t say you stop conquering; you stop inventing, you stop moving, but it doesn’t mean you go in the wrong direction, you end up. Because of our wrong actions, we will end up here. The globe will remain forever.

We have to think that we are spending a lot of money to build life om mars. There are billions of dollars budgets. We have to spend only a small part of said money for betterment of our earth, for supporting our earth. Because it is our mother and it has given us the opportunity to evolve us.

On the other hand, there will be plenty of time to build life on another planet and may be it take millions of years. Because universe has its own rule, it is not obeying us.
Give space to others that they also give you space. Keep the earth happy so that your descendants can be happy. And there will be no need to go on Mars for new Earth.