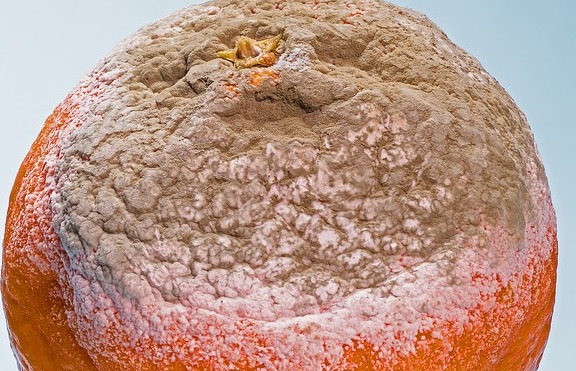 Rotten and deteriorated food and perishable goods that are unacceptable and unable to ingest by consumers are mainly concerned with food spoilage.

It is a metabolic process that involves any sensory change, damage, or injury in the food and perishable goods which make it undesirable and unacceptable to eat and being consumed by organisms.

These sensory changes may be visual, olfactory, tactile or change in the flavor of food. Spoiled foods are harmful to health and cause poisoning and illness in the organisms.

But sometimes some spoiled food may not be harmful and may be safe to eat as they are not causing illness and any harmful pathogenic diseases but these foods are not suitable and being rejected by their appearance, smell, taste and odor.

Every year about one-third of the total food of the world is destroyed and damaged due to food spoilage.

Food can be spoiled in different manners such as due to biodegradation by enzymatic activity, by insect damage or through microorganisms such as bacteria, fungi, algae, molds, yeasts, etc

Severe food spoilage is mainly due to the chemical reaction of microbes as they use use food for energy and to obtain carbon from the food. These microbes are most commonly found in soil habitat and water habitat but they may be present air by dispersing through different insects. These microbes may be selective causing damage in only one species of food or they may be present on many food species to create spoilage. Mostly bacteria and fungi are the main sources of food spoilage. They damage food in many ways and deteriorate it, make it unsuitable for health and consumption.

Food spoilage is mainly due to bacteria that are responsible for its damage as they release acids and other harmful waste material during the breakdown of food components. These waste products are very harmful and cause severe health problems.

Food spoilage due to fungus

Fungi is also responsible for food spoilage and deterioration of edible, perishable goods and they’re rotting. Fungi is a large group of organisms and have sub classes. Yeasts and molds are the most common types of fungi that cause food spoilage. Their damage pattern is explained as follows.

These are the most common type of fungi and are unicellular organisms having adaptations for survival and life in a specialized surrounding area or environment. These are usually live in a liquid medium.

Yeasts are not capable of producing xenobiotics and toxic secondary metabolites as some mushrooms and molds do so and produce toxic chemicals. Yeast has the ability to grow within or without oxygen (also known as facultative) depending upon the situation of the environment.

They are used in the fermentation industry due to their fermenting ability and are also beneficial for us in baking, bread, beverage industry, etc. They spoil pickles and some fruits, juices that have a low ph are targeted by yeasts. Some types of yeasts are also found on the surface of beef causing damage to it and also on cheese.

Spoilage yeast can be classified into four categories as follow

rate is much higher by 24% in salt concentration. They can be frequently isolated from Brine solution, which is used for the preservation of meat, olives, and cheese, etc. They can also be observed in salad dressing and spoiled it.

These are the group of nonfilamentous fungi. Unlike mushrooms, they are not capable of producing long fruiting bodies. In nature, molds are commonly involved in the degradation and recycling of dead and organic matter of dead plants and animals. Although they are beneficial to us some times they may harm and damage many useful compounds of humans and attack food varieties at a large scale. They have the adaptations to live on a solid substrate environment and need oxygen for survival and metabolism. Airborne spores are produced by molds. They require a pH limit range from 3-8 and very low water activity in dried fruits and seeds etc. Spore are dormant and have very high resistance against harsh conditions of the environment such as temperature or salt concentration. Carcinogenic metal toxins and toxins are produced by molds during secondary metabolism.

There are four main categories of spoilage molds. These are as follows:

Zygomycetes are thought to be the most primitive type of fungi and they are commonly found in nature and are widespread. They use plant debris and organic matter as a source of carbon from the soil and grow rapidly. They cause the rotting of strawberries and sweet potatoes and many other stored fruits and spoiled them because they need high water quantity and activity for their growth.

Mucor and rhizopus are the two most common and well-known examples of Zygomycetes.

Penicillium has the most distinctive features of the formation of conidia chains in reproductive structures. These species are useful in such a manner that antibiotics are obtained from these but they cause spoilage and rotting of citrus fruits, apples, pears, etc. crops are spoiled on large scale. They also target to damage many fruits and vegetables, cereals are also affected from Penicillium.

Another common type of mold is Aspergillus that has high tolerability with temperature and as compared to Penicillium they have very low water activity. Their rate of growth is faster and they cause spoilage and damage in warmer climates. Many toxic substances such as aflatoxin, terittinum, mycotoxins, are produced by some Aspergillus. They not only spoil food items but also damage leather, paper, etc. Their damage pattern is mainly on grains, nuts, beans dried beans, tree nuts, and many other related materials.

Those bacteria who have heat resistant and produce spores are the main source of bacterial food spoilage because the spores are highly resistant to heat treatment and can survive under high temperature and they damage foods that are heat treated.

As some bacteria are capable of living without oxygen and can survive in the absence of oxygen and do anaerobic respiration! also known as facultative bacteria) so they damage canned food which is sealed at very high temperatures and spoils them by releasing carbon dioxide, hydrogen, or hydrogen sulfide.

Canned foods having high or low pH are spoiled by Bacillus and Geobacillu thermophilic bacteria species.

Clostridium species cause rotting and putrification of food products stored in canned. They start the production of butyric acid in canned food that is usually fruits and vegetables. Specific medicines like flavor arise due to the activity of bacteria in the canned food with low acid.

Chilled meat and brine-treated foods are deteriorated by Colastridium species due to the production of gas and off odor, sickly smell.

Some gram-positive bacteria are useful in lactic acid fermentation, production of fermented foods like yogurts and pickles. However, these bacteria become predominant spoilage organisms under certain favoring conditions such as acidic medium, low level of oxygen, and decrease in temperature.

They can spoil meat and turn it into greenish color and produce gases that when evolved caused blowing in cheese, change the flavor of meat, milk, juices, and wines.

Exopolysaccharide is also produced in excessive amount by lactic acid bacteria which affects on meat and give it slimy appearance and in some beverage, it cause ropy spoiling.

Dairy products are spoiled by a bacterium group Alcaligenes which is isolated from milk and butter that have been spoiled with an off odor. This bacteria is mainly present in the digestive tract of some animal and also occur naturally in air and soil.

To increase the shelf life of food items it is necessary to protect them from microbes and spoiling agents. There in s a continuous fight between food spoilage microorganisms and the preservation of food to make food safe and healthy from the microbes that spoil it.

Protective measures can be adopted during the preparation of perishable goods and food items and also during their storage, packing, etc.

There are several methods for the preservation of food such as heating, refrigerating, boiling, salting, introduction of antimicrobial agents against spoilage microorganisms.

Weak organic acids are used on a classical scale to preserve foods. This is a very common method of using acid-like ascorbic acid, acetic acid, benzoic acid, etc. These acids act as inhibitory agents and reduce the growth of bacteria, fungi. They also resist the formation of outgrowths and spores.

Sterilization of food products before they canned and high concentration of salts is also a preservative method for some foods.

In this process, certain chemicals are used to avoid microbial growth, retardation in their development, and inhibit microorganisms’ activity.

Use of food additives

Substances that are present in the food as a reagent are called food additives. These include spices, acids, and sugar. These substances retard the growth of microbes and exert high osmotic pressure on the membrane of the cell hence the cell bursts up due to the plasmolysis of cells. Additives kill the microorganisms and retard their growth by making microbes unable to multiplication of their number.