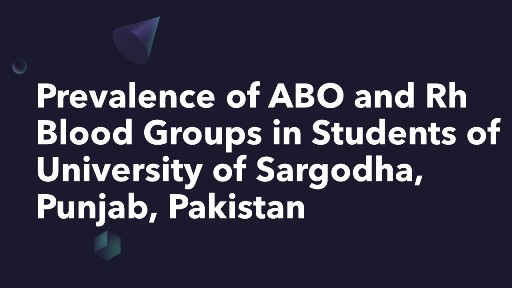 Prevalence of ABO and Rh Blood Groups in Students of University of Sargodha, Punjab, Pakistan

The aim of the present study was to record the prevalence of ABO and Rh blood groups among the graduate and post graduate students of University of Sargodha. A total of 1341 individuals (449 males and 892 females) were screened for blood group testing. Blood group B was the most common in both sexes. The AB blood group was least common. About 90% individuals were Rh positive. The frequencies of ABO and Rh blood groups are similar to those reported from other regions of Punjab. Data generated with this study will be helpful to the health planners, blood banks and blood donating societies in the area.

In humans, approximately 400 red blood antigens and 19 blood groups systems have been identified (Rehman et al., 2005; Khattak et al., 2008). Both ABO and Rh blood group systems are considered important during blood transfusions. Although the blood group systems are same among all human beings but the prevalence of ABO and Rh groups is different in various parts of the world and in different races. The study of ABO blood group system is of immense interest, due to its medical importance in different diseases and its role in blood transfusion, forensic pathology and its association with different diseases like duodenal ulcer (Hoffbrand and Pettit, 2006), diabetes mellitus (Garraty et al., 2000) and urinary tract infection (Rehman et al., 2005). Blood group system is considered one of the strongest predictors of national suicide rate and a genetic marker of obesity (Mollison et al., 1993; Hein et al., 2005). Study of blood group is helpful to know the genetic history of a person (Sokolov, 1993). For example, protein intake is very high among the individuals of blood group O and they generally secrete higher stomach acids and experience more incidence of gastric ulcer disease than the other groups. However, individuals of blood group A are associated with vegetarian food sources and secrete smaller amounts of stomach acid and have lesser chances for gastric ulcers, heart diseases, cancer and diabetes (Viola and Carolyn, 1991). From above review it is clear that blood group determination is very important in

clinical practice. Keeping in view of this fact

present study was planned. Aim of this study was to investigate the prevalence of ABO and Rh blood group systems in district Sargodha and to compare the results with other studies conducted in Pakistan and in other parts of the world.

The study was conducted during the month of February, 2011 and March, 2012. Only the data of graduate and post graduate students (both males and females) belonging to Sargodha region were included in this study. Each donor was informed about the purpose of the study. Blood samples were taken under aseptic conditions using finger prick method. ABO and Rh blood groups were

determined by agglutination test using antisera-A, antisera-B and antisera-D. A total of 1341 (892 females and 449 males) individuals were screened for the blood group testing. The number of the females screened for the ABO and Rh blood groups was high as in University of Sargodha ratio of females students is very high.

ABO blood group system is considered the most important during blood transfusions as the most of deaths from blood transfusion occurs when incompatible type of ABO blood is transfused (Sarban, 2009). It has also been found that susceptibility of certain diseases is linked with the ABO blood groups. According to Stayboldt et al. (1987) gastric cancers are more common among the persons of A blood group. Furthermore, coronary heart disease, ischemic heart disease, venous thrombosis and atherosclerosis are also more frequent among the individuals with A blood

Of the total 1341, about 90% individuals were Rh positive in the present study. A comparison of Rh blood groups of the current study and with other studies in Pakistan and studies from other parts of the world is given in Table III. It is clear from the comparison that there is shortage of Rh negative blood group in the population.

It is concluded from the study that, like other regions of Punjab, the most common blood group in the Sargodha region is B. AB blood group is the lowest in frequency. About 90% of the studied population was with Rh positive blood group. This information is important for the blood banks and blood donating societies as well as health planners.