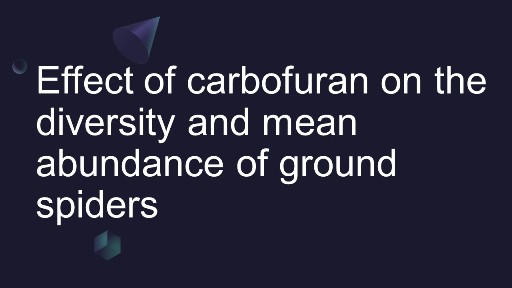 The effect of carbofuran on the diversity, richness, evenness and abundance of ground spiders is documented in the present study. Two fields (control and treated) were selected in district Kasur during 2008 and 2009. Pitfall traps were used to collect ground spiders. A total of 1629 specimens of spiders, belonging to 8 families, 16 genera and 24 species were recoded from control field while 1173 specimens belonging to 8 families, 14 genera and 20 species were recorded from the treated field. The most dominant family and species in both the fields were Lycosidae and Lycosa terrestris, respectively. Family Lycosidae accounted more than 90% of the total spider sample. Diversity, richness and evenness of ground spiders in the treated and untreated field did not differ. However, the abundance of dominat spiders declined significantly in the carbofuran treated field. It is concluded that the use of carbofuran is a serious threat to the ground spiders, the important group of biological control agents. So, the use of carbofuran should be minimized in the fields.

(Marc et al., 1999; Relyea, 2005). The extensive use of insecticides in crop ecosystems also reduces their efficiency in biological control (Paul and Thygarajan, 1992). It has also been observed that insecticides not only cause death of spiders but also change their body structures (Rezac et al., 2010). However, due to long life spans of spiders, some spiders show tolerance and even resistance, to certain pesticides. Spiders are less affected by fungicides and herbicides than by insecticides (Yardim and Edwards, 1998). Factors that influence the effects of pesticides on spiders are types of solvents, soil type, moisture, percent organic matter, temperature and time of day of spraying. Furthermore, the micro habitat, hunting style and foraging behavior of the spider also influence their response to pesticide application (Marc et al., 1999; Shaw et al., 2006).

Current biological research emphasize on the con­servation of indigenous predators including spiders for biological control of insect pests. In order to avoid or minimize the use of pesticides in the agro-ecosystems, it is necessary to conserve spiders and other natural enemies. The present study was aimed to examine the effect of carbofuran on the abundance and diversity of ground spiders in rice agro ecosystems.

Study was conducted from June through November 2008 and 2009 in district Kasur (31°08’N, 74°27’E) of Punjab, Pakistan. Two sampling sites [(that is, village Piruwala (S-1) and Lilyani (S-2)], each comprising one acre, were selected for the study. The sampling sites were selected at random. Sampling site S-1 was not treated with any insecticides in either study year and treated as control. Site S-2 was treated with Carbofuran on 7 July and 11 July in 2008 and 2009, respectively. After the treatment collection was done after at least five days.

Pitfall traps were used to collect ground-active spiders. Each pitfall trap consisted of a wide mouthed glass jars with 6 cm diameter and 12 cm deep. During sampling, the jars were installed in the ground such that their rims were at the level of ground. Traps were set in 3 x 3 m grid pattern. Each grid contained four traps. Four grids were installed within 10 m of margin and 4 girds in the centre of the fields about 40 m from field edge at each site. Two hundred and fifty milliliter of 70% ethyl alcohol and two drops of 5% liquid detergent were added to each trap (Tahir and Butt, 2008). Floating pitfalls were used during the flooding conditions (from mid of June to August each year). At each study site, traps were operated consecutively for 72 h (trapping session) after every fifteen days. All the collected specimens of spiders were transferred to glass vials (1.5 cm diameter x 3 cm deep) containing 70% ethanol and brought to the laboratory for identification. Spiders of all ages were collected during the study. Dyal (1935), Tikader and Malhotra (1980), Tikader (1987), Tikader and Biswas (1981), Proszynski and Zechowska (1981), Barrion and Litsinger (1995), Proszynski (2003) and Platnick (2007) were consulted for the identification of spiders. Collected spiders were deposited at the Biological Pest Control Laboratory, Department of Zoology, University of the Punjab, Lahore, Pakistan. Spider species were considered dominant, if they accounted for 1% of the total abundance, while most dominant, if represented by more than 10% of the total catch. Spider species that represented less than one per cent of the total specimens, but still common in the fields, were called agrophile, whereas those represented by five or fewer than five specimens were considered rare species (Tahir and Butt, 2008).

Data from two years of each sampling site was pooled together as there was no significant difference. Simpson’s index was used to calculate the diversity, Margalef index to calculate the species richness and modified Hill’s ratio (E5) to calculate evenness (Ludwig and Reynolds, 1988). Mann-Whitney U test was used to compare the abundance of spiders among trapping sessions. Analysis of variance was used to assess the differences in diversity, richness, evenness and abundance of the spiders in different trapping sessions of control and treated field using Minitab 13.2.

Total trapping effort resulted in the collection of 2802 spider specimens, consisting of 8 families, 16 genera and 24 species (1629 spiders specimens from control and 1173 specimens from treated field) (Table 1). Of the total, count two species were most dominant, three dominant, nine agrophile and twelve rare. The most abundant family of the data in both fields was Lycosidae, counting 95.02 and 93.26% of the captured spiders in control and treated field, respectively. Of the total count, 26.60% specimens were male, 34.40% female and 40% immature. The most abundant species of that data was Lycosa terrestris

shortage of food. But what is the actual story behind need to be investigated. Negative effects of carbofuran on ground spiders have also been reported by Culin and Yearga (1983) and Epstein et al. (2000). Two most dominant species of the data were L. terrestris and P. birmanica. Although, the number of both of these species in the treated field compared to the control field still there number was high compared to the other spiders species recorded from both fields (Table 1). Their high
percentage in the fields suggests that they must be competing for the resources but how these species segregate the available resources in space and time need to be studied. Different species can co-exist in the same habitat if they partitioned the available resources in space and time (Uetz, 1977; Langellotto and Denno, 2006; Toshinori, 2007). The number of one salticid species, Hassarius adansoni, was about three times higher in the treated compared to the control field. Why it

means abundance at the end of September to early November were due to the peak of crop as maximum resources were available at that time. Evenness values were high during the first two and last two trapping sessions. This was also expected as during these trapping sessions only few species were present in the field due to less availability of food resources. The species which were recorded during the period of food shortage might be better adapted to cope with the conditions of limited food resources or they might have ability to feed on the alternative prey types (such as collembolans) present in the field other than their preferred food during this period. Spiders can feed on the alternatives prey items during the early crop season when actual prey is not abundant in the field (Toft, 1999). From the present study, it is evident that use of carbofuran in the rice fields has a negative effect on the abundance of ground spiders especially the wolf spiders; the major predatory group in agro ecosystems. It is therefore recommended that those pesticides should be

used in the fields which are harmless or cause minimum negative effects to the existing natural enemies of insect pests. Before recommending a pesticide to the farmers, its effects on the natural predators should be tested in the laboratory and in the fields.