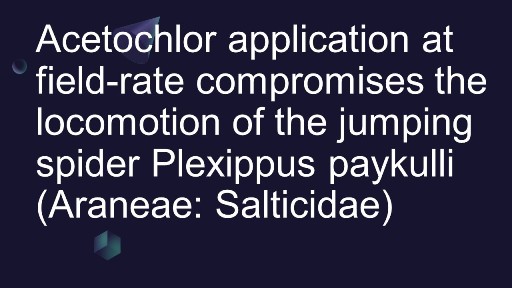 2Department of Zoology, University of the Punjab, Lahore, Pakistan.

The present study addresses the direct effects of acetochlor (herbicide) on the mortality, behaviour and growth of the Plexippus paykulli (Savigny and Audouin, 1827). For the study, spider specimens were captured from the ornamental plants of University of Sargodha, Pakistan using the Jerking method. Spiders were exposed to the herbicide treated filter papers. Mortality was very low in the dosed spiders (13%) at the field rate concentration of herbicide. Non-significant difference was recorded in the time spent by tested spiders on the herbicide or water treated part of the filter paper. Locomotory time was significantly reduced in the treated group of spiders compared to group of spiders not exposed to the treated filter papers (control group). Results of the study suggest that acetochlor has negligible effects on the experimental species (P. paykulli) under the laboratory conditions. It is recommended that before considering acetocholr for integrated pest management (IPM), it is necessary to investigate the indirect effects of this herbicide on the experimental species. Furthermore, effects of acetochlor on other spider species and arthropod predator should also be considered.

In agro-ecosystems, role of spiders is very important as they limit the growth of insect pests (Snyder and Wise, 1999; Nyffeler, 2000; Sigsgaard, 2000; Maloney et al., 2003; Venturino et al., 2008; Chatterjee et al., 2009). Many researchers have documented the impact of insecticides on survival and behaviour of spiders (Asteraki et al., 1992, Fernandes et al., 2010) but the data on the effects of herbicides on mortality and behaviour is rare.

According to the study of Yardim and Edward (1998), Haughton et al. (2001b) and Michalkova and Pekar (2009), effects of herbicide on the spiders are negligible. However, many researchers claimed that herbicides not

only affect the survival of spiders but also influence their behavior (Haughton et al., 2001b; Bell et al., 2002; Tietjen, 2006; Deng et al., 2007; Wilder and Rypstra, 2007). Herbicide may reduce the predatory potential of spiders, as the pests might become distasteful with herbicide application and be avoided by natural enemies. This increases the chance of escape for the prey from predation (Cohn and MacPhail, 1996; Amalin et al., 2001).

The cosmopolitan, Plexippus paykulli (Savigny and Audouin, 1827) is a dominant jumping spider species and active hunter in many agricultural crops and orchards (Skinner, 1974; Muma, 1975; Mansour et al., 1982). The adults and immature can be found throughout the year in different agricultural fields (Edward, 1979).

and India (Rao et al., 1981). This spider is a polyphagous predator feeding on a wide variety of arthropod taxa including Odonata, Orthoptera, Homoptera, Lepidoptera, Diptera, Hymenoptera and other Araneae (Edwards et al., 1974; Muma, 1975; Edwards, 1979; Miah et al., 1986; Jackson and Macnab, 1989). They also significantly control the populations of some important vectors (that is, muscoid flies, mosquitoes etc.) of human and domestic animal diseases (Edward, 1979).

Acetochlor (2-Chloro-N-ethoxymethyl-6’-ethylacet-o- toluidide) is widely used in Pakistan for the control of weeds in various agricultural crops. The present study was designed to investigate the effects of acetochlor on the mortality, growth, and locomotory behaviour of P. paykulli.

The study was conducted from November 2010 to March 2011 in the Department of Biological Sciences, University of Sargodha, Pakistan. For the experiment, live specimens of spiders were collected from the ornamental plants (Polyalthia longifolia: Annonaceae and Duranta repers: Verbenaceae) of the University of Sargodha.

Spiders were collected by jerking the plants over a white cloth spread on the floor. Collected spiders were individually placed in plastic containers covered with mesh cloth to be taken to the laboratory. Collected spiders were brought to the laboratory and were identified by using Dyal (1935). In the laboratory, each spider was placed individually in the plastic container (8.75 cm wide and 3.75 cm high) containing moist sand at the bottom and fed Drosophilla melanogaster. Containers were covered with mesh cloth and maintained at room temperature (32 to 38°C), humidity (60 to 78%) and photoperiod of 12: 12 h (Light: Dark).

For residual bioassay, only field rate concentrations (recommended rate to spray in the agricultural fields) of acetochlor (200 ml/acre) were used. Filter papers (6 x 12 inches) were dipped in the herbicide solution and dried by placing in the sunlight for one hour. After drying, filter papers were rolled and kept in the glass jars (9 cm long and 3.5 cm wide). Spiders (n = 30, 15 for treatment group and 15 for control group) were placed in these glass jars for one hour to expose them to the herbicide. After exposure, treated spiders were placed individually in the clean glass vials (9 cm long and 3.5 cm wide), covered with mesh cloth.

Status of spiders (active, inactive, dead or paralyzed) was checked in each glass vial after 4, 8, 16, 24, and 48 h intervals. Spiders were considered active if they showed normal locomotory activity, inactive if not showing locomotory activity, paralyzed if there is no movement of body parts but responded when touched with needle and dead if spiders did not respond even when touched with a needle.

To check the locomotory behaviour, spiders (n = 30) were exposed to the filter papers treated with field rate of herbicide or distilled water. The method of preparation of filter paper was same as described in the avoidance behaviour experiment. The time spent in the locomotory or non locomotory activity was recorded till half an hour.

To evaluate the effect of herbicide on the growth of body, immature spiders of same size and weight were selected. Spiders were divided in two groups (that is, treated and control groups). Each group contained 30 specimens. Spiders of both groups were maintained at room temperature (32 to 38°C), humidity (60 to 78%) and a light: dark cycle of 12:12 h. The experimental group was exposed to the herbicide treated filter papers (field rate concentration) for one hour every five days for a one month while control group with distilled water. Experiment was replicated thrice.

To fulfill their nutritional requirements, wet cotton was dipped in a mixture of honey and soya sauce and kept in each glass vial. Each glass vial was covered with mesh cloth and tightened with rubber band. The cotton was replaced each day till 30 day with a same procedure. After 30 days, spider specimens were preserved in the mixture of glycerol (30%) and alcohol (70%).

Although there was higher mortality in the treated group of spiders group compared to the control group (at recommended field rate) but statistically, difference was not significant (df = 28; t = 1.80; P = 0.08). The activity of the herbicide treated spiders was reduced just after the exposure but with the passage of time (after 8 h of exposure), we observe normal activity in 90% of herbicide treated spiders.

Our results of low mortality of spiders with herbicides are in accordance with the findings of many other researchers. Pekar (2002) reported that immature spiders Theridion impressum (L. Koch), under laboratory conditions were not killed by the herbicides metazachlor, clomazone and clopyralid. Similarly, Haughton et al. (2001b) and Benamu et al. (2010) also confirmed that mortality rates of Lepthyphantes tenuis (Blackwall) treated with widely used herbicide glyphosphate are negligible. But many researchers claimed that spider number is significantly affected even by a relatively low rate of herbicide application (Baines et al., 1998; Bell et al., 2002). Some other researchers also reported the lethal effects of herbicides on the terrestrial arthropods including spiders (Lindsay and French, 2004; Cauble and Wagner, 2005; Tietjen, 2006; Michalkova and Pekar, 2009).

Evans et al. (2010) reported that lycosid spider Pardosa milvina (Hentz, 1844) avoided surfaces where herbicides had been applied. But in the present study, P. paykulli did not avoid the surface (filter paper) treated with acetochlor. Pekar and Hadded (2005) reported that herbicide and pesticide residue can be highly repellent to the spiders. But in another study, Michalkova and Pekar (2009) suggested that glyphosate is safe for the lycosid spiders.

In the field increased non locomotory time may also increase the chance that dosed spiders may spend more time on the herbicide treated patches, which in turn would have negative effects on the survival of the spiders.

Evans et al. (2010) further suggested in their study that speeds of the spiders increased over the substrate treated with the herbicides, which allow the spiders to spend less time on the contaminated substrate and in this way minimize the risk of herbicide exposure. In the present study, we did not study the effect of herbicide on the speed of the spiders.

Our results are in contrast with the findings of Benamu et al. (2010) who reported negative effects of the herbicides on prey consumption, web building, fecundity, fertility and developmental of spiders. Similar results herbicide effects on the development and reproduction have also been reported by Schneider et al. (2009). Our findings are also contradictory to the results of Zheng- Tian et al. (2008) who reported significant influence of Butachlor on the body weight, survival rate and life history of Pirata subpiraticus (Bosenberg and Strand, 1906).

The present study suggested that acetochlor has negligible effect on the mortality of studied species. Locomotory time is significantly reduced in herbicide treated spiders, which may have negative impact on the predatory potential of the studied species. As some researchers have reported negative effects of herbicides, some on prey consumption, fecundity, fertility and developmental of many spider species, it can be predicted that affects of herbicides on the spiders species are species specific.

Although acetochlor appeared safe for the studies species but before the recommendation of acetochlor to be
use in integrated pest management, it is necessary to investigate the effects of this herbicide on other spider species and other arthropod predators.

Asteraki EJ, Hanks, CB, Clements RO (1992). The impact of the chemical removal of the hedge-base flora on the community structure of carabid beetles (Coleoptera: Carabidae) and spiders (Araneae) of the hedge bottom. J. Appl. Entomol., 113: 398-406.

Skinner RB (1974). The relative and seasonal abundance of spiders from the herb-shrub stratum of cotton fields and the influence of peripheral habitat on spider populations. MS Thesis, Auburn University.

Sigsgaard L (2000). Early season natural biological control of insect pests in rice by spiders – and some factors in the management of the cropping system that may affect this control. European Arachnol., pp. 57-64